OF ITS PUBLIC LAUNCHING, AND THE 95TH GOSR ANNIVERSARY

The Partido Komunista ng Pilipinas (PKP-1930, the Philippine Communist Party) celebrated the 82ND anniversary of its public launching, and the 95TH  anniversary of the Great October Socialist Revolution (GOSR) on November 7, 2012, at the 4K Resort in Santa Maria town in Bulacan province, just a city away from Metropolitan Manila. The 400 delegates were welcomed by Comrade Juanito Pascual, a Political Bureau member from the host province.

Leaders of several mass organizations greeted the Party’s anniversary, and paid homage to the Party’s role in guiding the struggles of the different sectors of the working masses for the betterment of their social conditions. A highlight was the report of the peasant and agricultural workers’ federation on the recent victory with the breaking up and distribution to tenants of the large Hacienda Arrastia, an estate (latifundia) in Lubao, Pampanga province. The struggle for agrarian reform in the area was led by Party members, who never wavered despite violent attempts of the henchmen of the landlord clan to eject the tenants during the past decade.

Short reports were also given by leaders of several Provincial Party Committees, a representative of the indigenous peoples, and representatives of a progressive multi-sectoral organization which will vie for “partylist” congressional seats in the May 2013 general elections. This partylist organization condemned the recent move of the government’s Commission on Elections to disqualify their organization for having a multi-sectoral composition. While this partylist organization will bring an appeal to the supreme court, mobilizations are being planned to condemn the Aquino regime’s apparent scheme to exclude progressive organizations, to support its own pliant multi-sectoral organizations, and to curry favour from religious-based organizations which are also vying for partylist congressional seats in next year’s elections. A call was also made for strong support for Party members who will be running for provincial, city and municipal positions, particularly during the campaign period next year.

The Party’s General Secretary, Antonio Paris, gave a speech describing the GOSR as the most important event of the modern era, which ushered for mankind the epoch of scientific socialism --- the new epoch of the transfer of state power to the hands of the working peoples. Under the influence of the GOSR, the PKP-1930 was organized by leaders of radical trade unions and peasant federations which were active in the Philippines since the 1920s. While the PKP-1930 was founded on August 26, 1930 (the 34th anniversary of the 1896 Revolution against Spanish colonialism), its founders had such great esteem for the GOSR that the public launching of the Party was set on November 7, 1930 (the 13th anniversary of the GOSR) at Plaza Moriones in the heart of the working class district of Tondo in Manila.

The aims that the Party laid out at its public inauguration included the overthrow of US colonial control over the Philippines, the strengthening of the unity of the workers and peasants, the ending of the exploitation of the working masses and the defence of their rights, and international solidarity with all revolutionary forces for the overthrow of the capitalist system and the building of socialism along the model established by the young Soviet state born of the GOSR. The USSR rapidly developed into a mighty state which became the main force that destroyed fascism during World War II.

The GOSR became a powerful beacon for all working and oppressed peoples, and inspired the formation of a socialist community in Europe after WW-II, inspired the national-democratic revolutions in China and Indochina, and inspired many anti-colonial revolutions which brought an end to direct imperialist rule in many parts of the world. Comrade Paris stressed that the fall of the USSR and the socialist community in the 1990s was not due to any systemic fault of socialism (as may be seen from UN data on their high socio-economic standards of development of that period), but was primarily due to the activities of the special agents of imperialism who wormed their way to the top leadership of the USSR and some other socialist countries. That tragedy led to the return to the former socialist community of all the systemic ills of capitalism --- unemployment ; savage exploitation ; grave social inequalities ; continued rise in prices of all products of privatized industries and utilities ; peoples’ growing inability to afford education, housing, health and other services ; organized graft and corruption ; criminality and ethnic or religious turmoil. With the temporary retreat of socialism, imperialism was emboldened to undertake the invasion of states and other interventionist means to institute “regime change” (such as the present US-led clandestine war against Syria).

However, the imperialist tide is now being stemmed by the socialist steadfastness of some states, and the rise of many socialist-oriented states in Latin America, Asia and elsewhere. Cuba was cited as the main example of socialist steadfastness, and Comrade Paris hailed the re-election of Venezuelan President Hugo Chavez Frias last month as a sign of the deep roots of socialist consciousness in Venezuela . The socialist path or orientation blazed by the GOSR remains rooted not only in Cuba and Venezuela, but also in Vietnam, Laos, Belarus, China, Syria, the Democratic People’s Republic of Korea, Cyprus, Nepal, Sri Lanka, Bolivia, Nicaragua, El Salvador, Ecuador and the other states which are members of the Bolivarian Alliance for the Americas (ALBA). Communist parties inspired by the GOSR also have substantial influence in such largely developed countries as India, Brazil, South Africa, Greece, Portugal, Spain and Russia. This situation gives the PKP-1930 greater confidence that socialism truly remains the future and salvation of humanity. 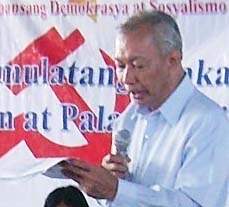 Comrade Paris paid tribute to the consistent nobleness of principles and aims throughout the history of the PKP-1930. While fighting for immediate and complete independence from US colonial control during the pre-war period, the Party also led the struggles for the setting of the minimum wage, for the 8-hour work day, for the breaking-up and distribution of friar and other feudal estates, for emergency employment and social security, for women’s suffrage and equality, and for civil and other democratic rights. Upon the outbreak of WW-II, the Party founded the Hukbalahap which became the most active anti-Japanese guerrilla force during the war. Right after the war, the Party led the struggles for land distribution, and against US “parity rights” and military bases in our country. At present, the Party remains relevant, primarily in the struggle against the presence of US forces under the “Visiting Forces Agreement” and the “Mutual Defense Treaty” ; in the struggle for national sovereignty, democratic rights, social services, affordable housing, agrarian reform and food security ; and in the struggle against the neo-colonial impositions of the WB-IMF-WTO and other imperialist agencies.

In conclusion, Comrade Paris paid tribute to the continued sacrifices of all Party members and their families, which sacrifices allow the PKP-1930 to carry on a leading role in the struggle against imperialism and local reaction ; for peace, freedom, and the national-democratic path towards socialism.